A while ago another package arrived from those good people at Weldtite: 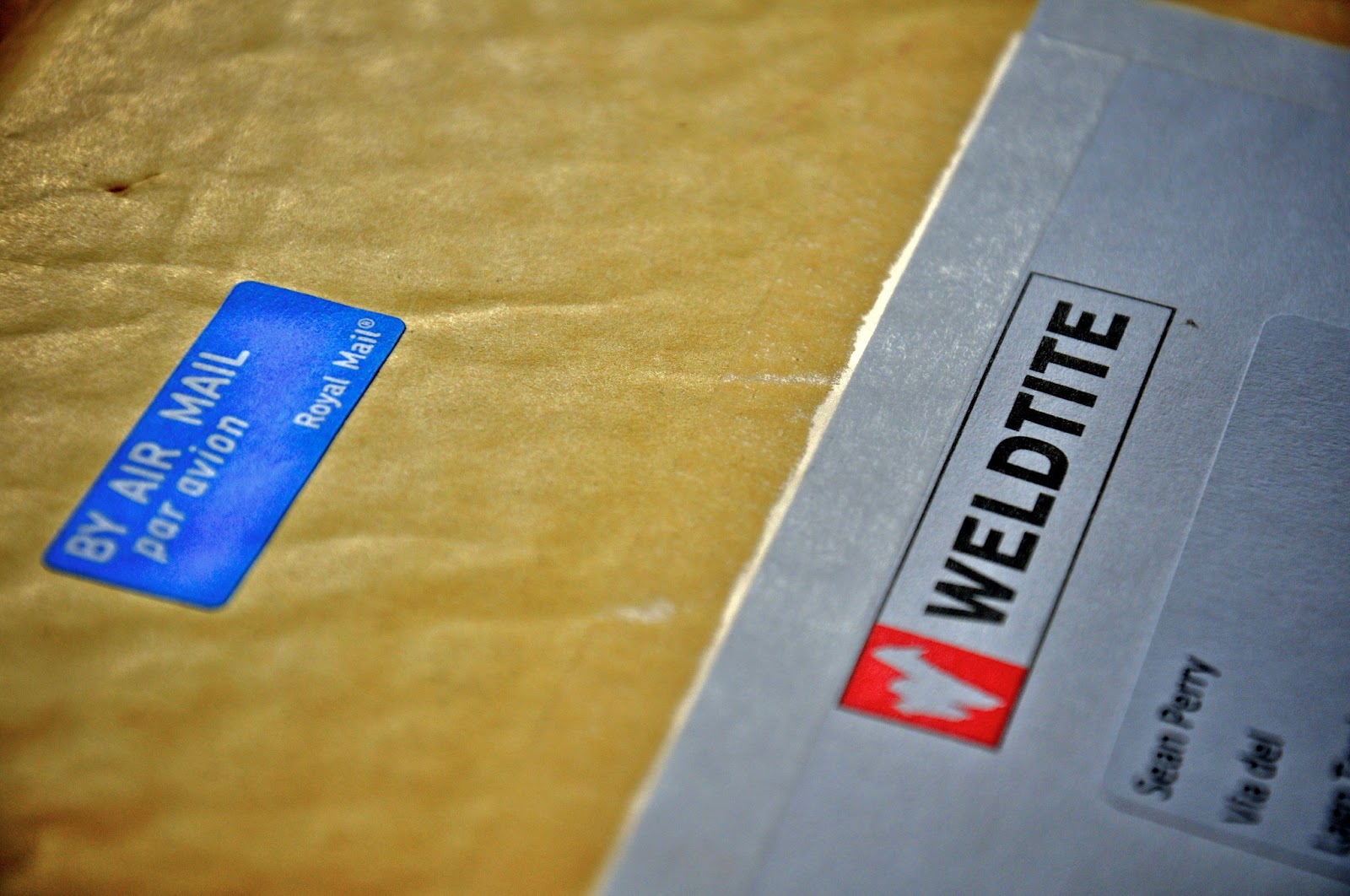 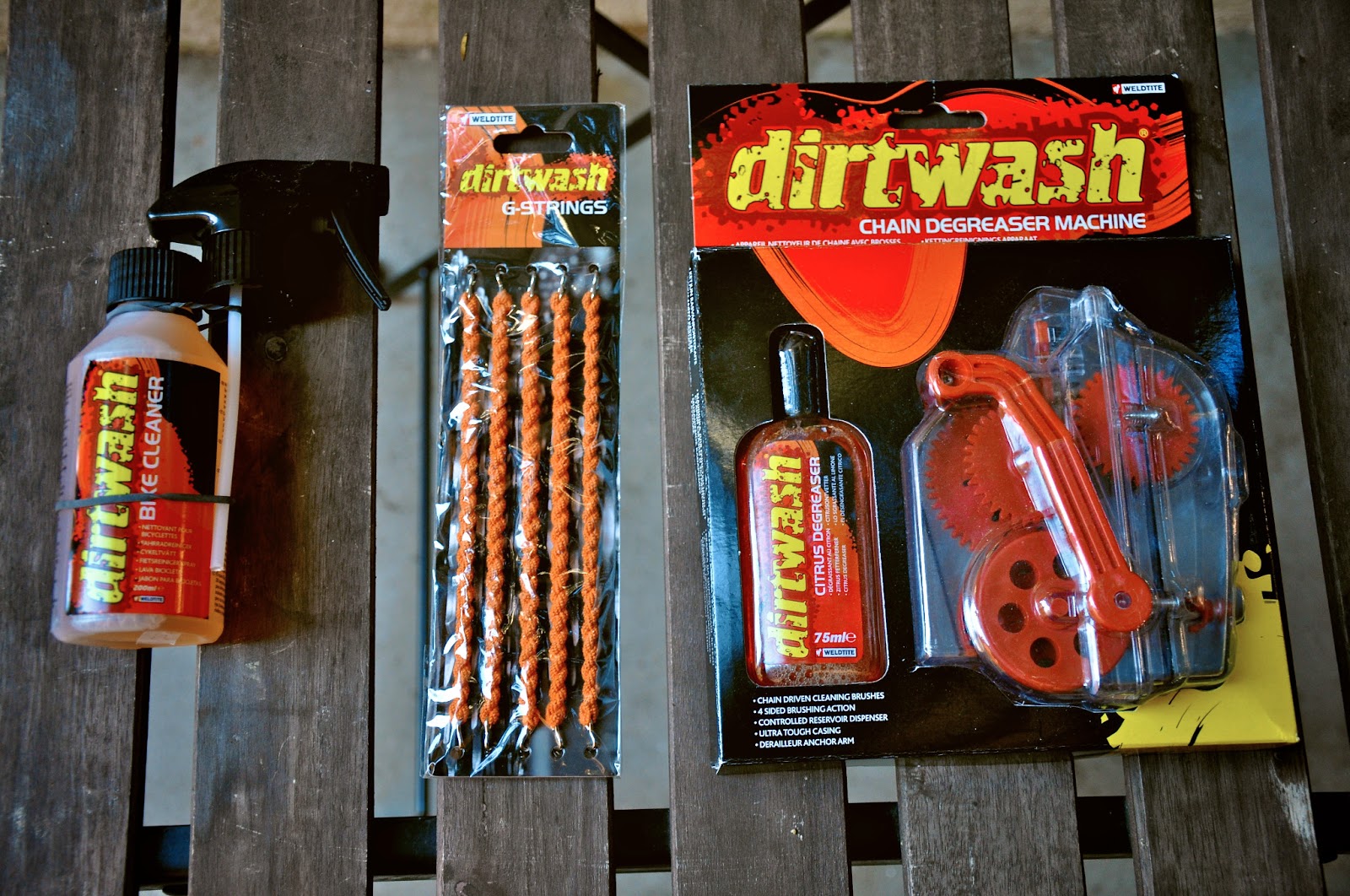 This time not one but three products to try out. They sure know how to make a bike geek happy. As it happens my old Stumpjumper has been sadly neglected since my accident, and I thought this would prove a good test. I've separated the three products to make it clearer.

Dirtwash
First of all the Dirtwash. The Stumpjumper wasn't excessively  dirty, but had a dried in layer of dust and grime from being stored outside, and the chain and cassette had a dried on grease and dirt. 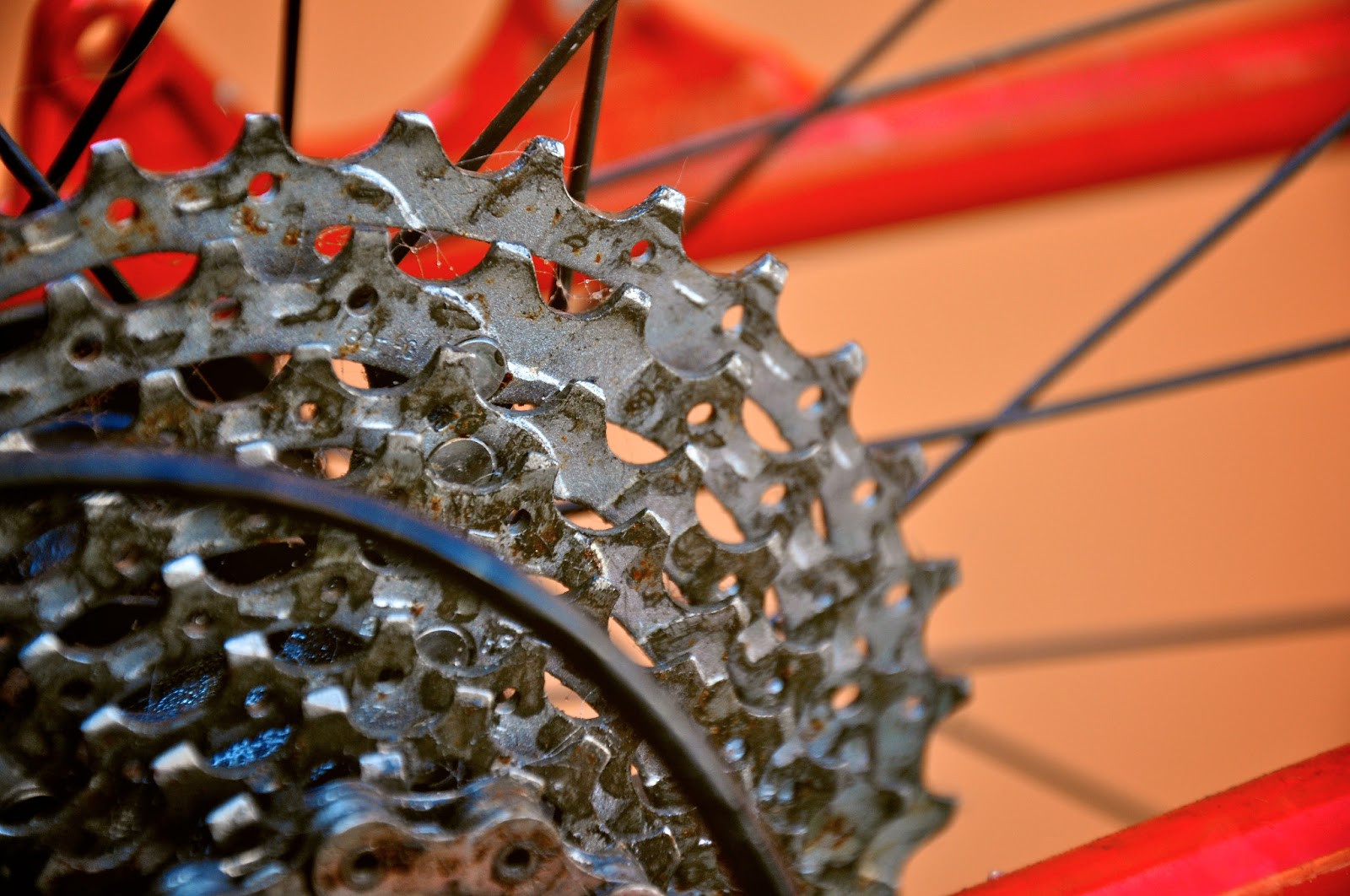 After giving the bike a wet down with a spray to remove the surface dirt and grime, I applied the Dirtwash. As with most cleaning products it comes with a nice little spray nozzle, so I happily gave the bike a light spray all over. and left it for 10 minutes. I then used a sponge to wipe the frame all over and make sure I got to all the dirty bits. I then used a hose attachment (with a fine setting so as not to force water into any seals etc.) to clean the dirty water away.

I was pleasantly surprised with the results. It certainly smells nicer than my old cleaner, and left the frame looking clean and sparkling. I didn't have to use any excessive force to remove any of the dirt, and it compared very favourably with other washes I've used such as Pedros and Muc Off. The wash had also removed the worst of the dirt from the chain and cassette, ready for the next stage of the clean.

Dirtwash Dirt Trap Chain Degreaser Machine
My old chain cleaner was bought in Decathlon, and was the only model they had. A compressed can sprays a foam in through the top, and a small lever keeps the chain cleaner on place whilst the other hand is used to rotate the pedals. It's never given any pleasing results, the chain always looked black and dirty, pretty much the same as when it started. 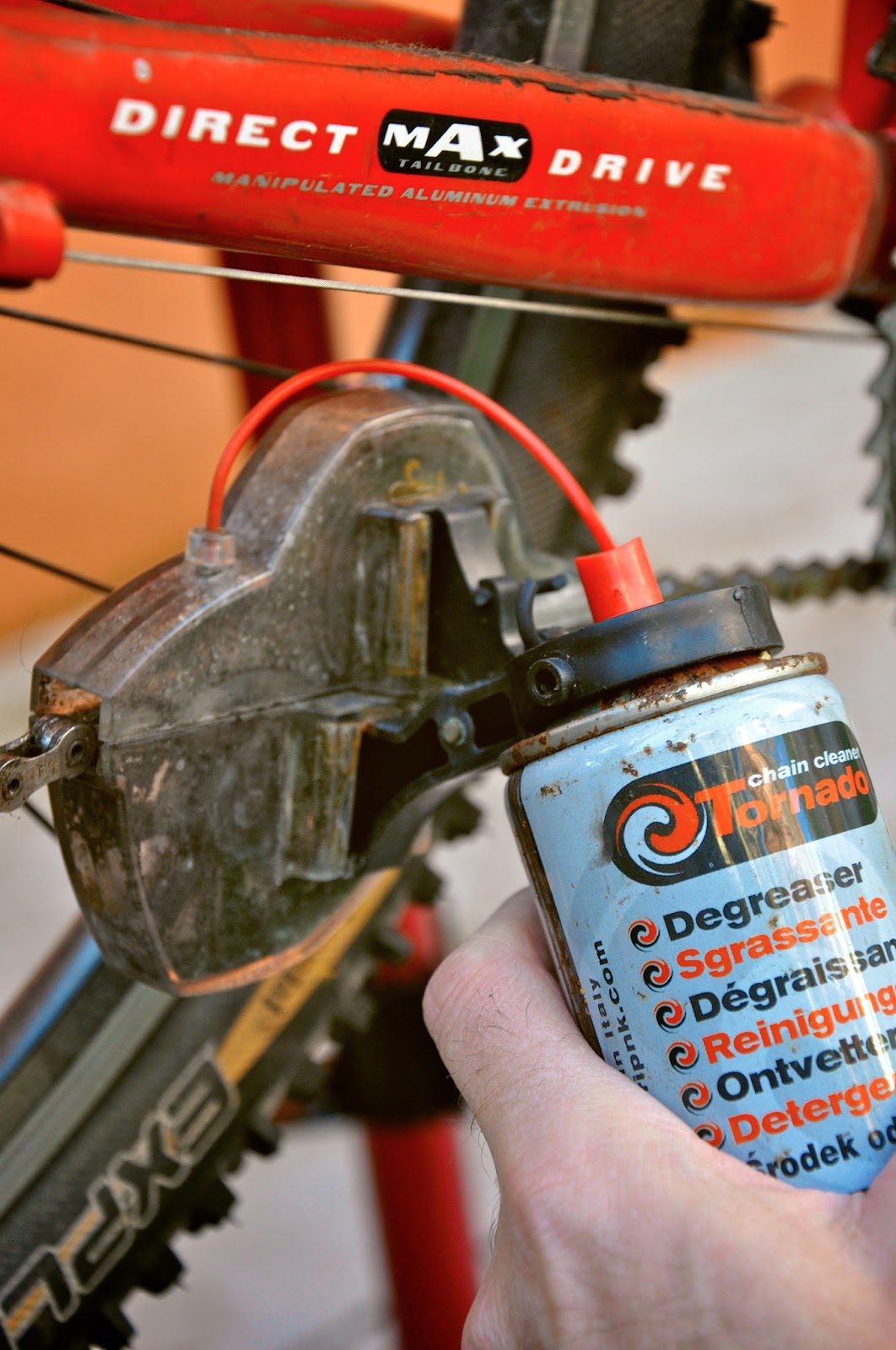 First thing that is really different from any other chain cleaning device I've ever owned, and that is the clever little arm, which serves two purposes. Firstly, it holds the device together when not in use, and secondly, frees up a hand when cleaning your chain. You simply split the two halves by swinging the arm around, place one part under your chain and place the other on top, hook back together at one end before closing,  hold closed, rotate the arm around to close firmly shut and hook onto your mech as shown below. 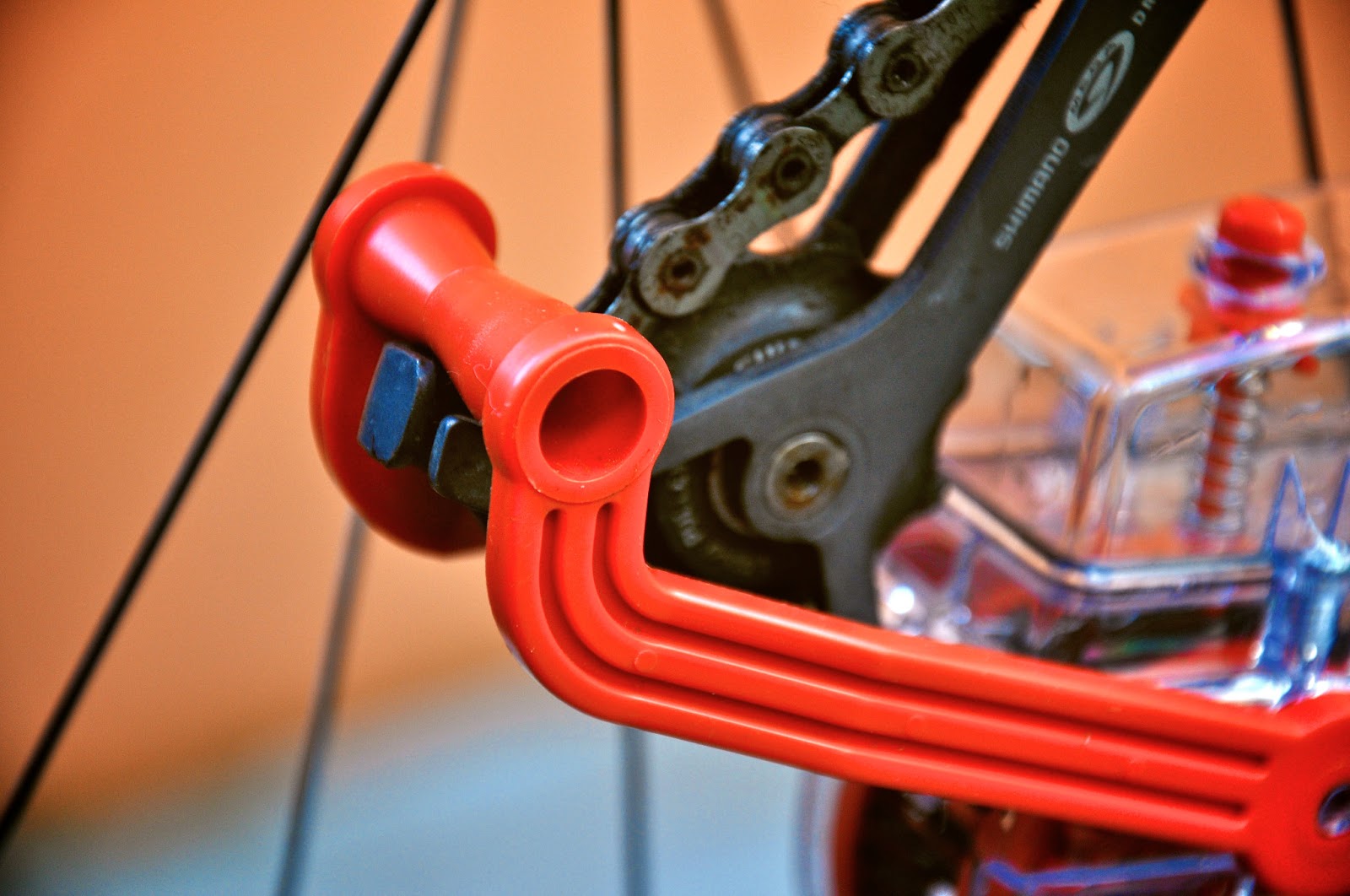 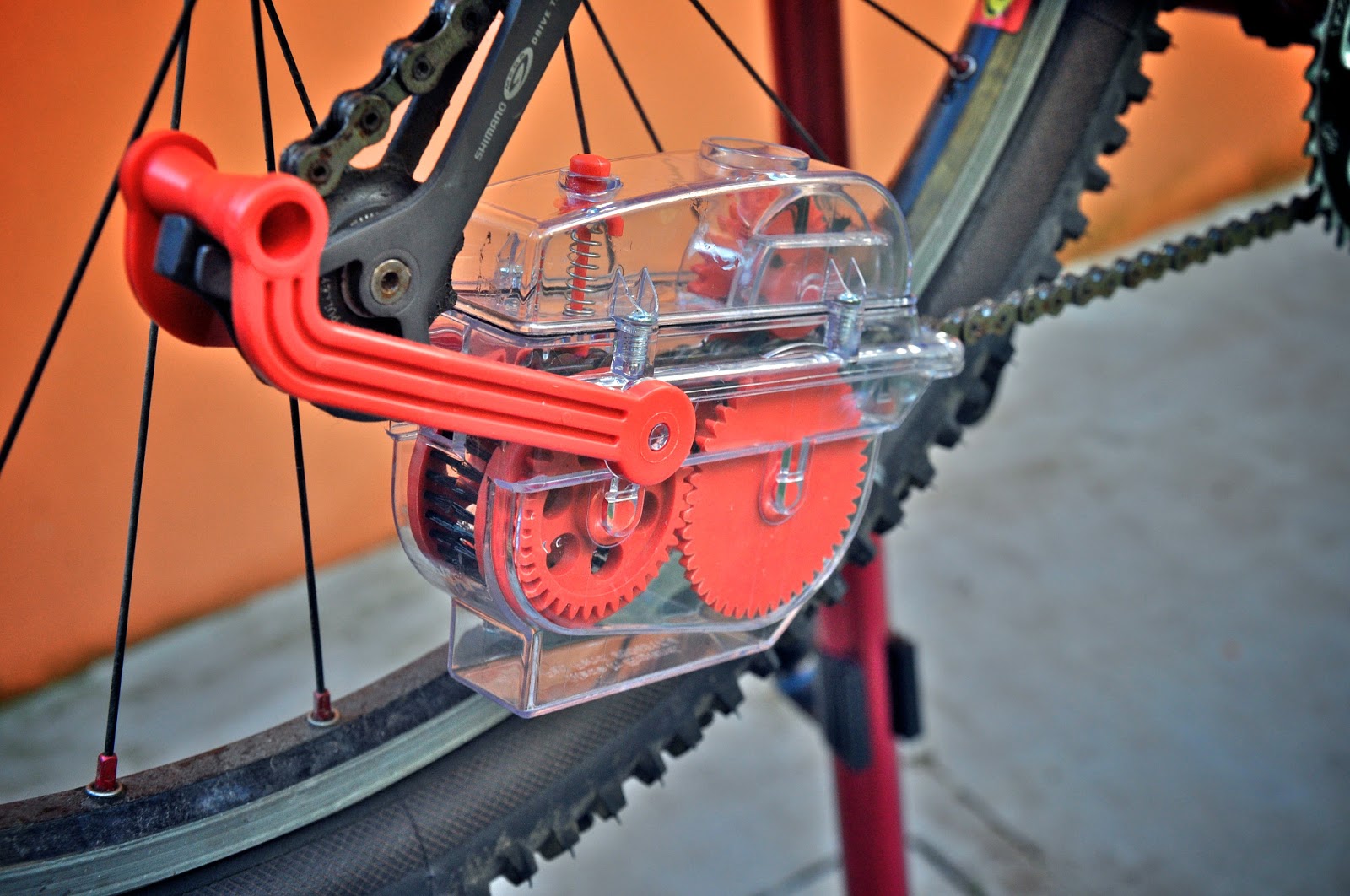 You then put a little degreaser (a little mind!), and press the red button to release a little at a time onto the clever little brushes, then pass the chain through and watch the dirt drop into the bottom of the reservoir.

The first time I used it I did manage to get the machine to jump off the mech by rotating my pedals forwards not backwards. Like most men I tend to just use things and rarely read the instructions (plus the print on the box was too small for me to read without glasses). It does say rotate backwards (I know that now....), but word of warning, like most things made of plastic it's not designed to be dropped onto a concrete floor. The very small blow up diagram on the packaging wasn't much help reassembling it, but thankfully it's fairly idiot proof to put back together 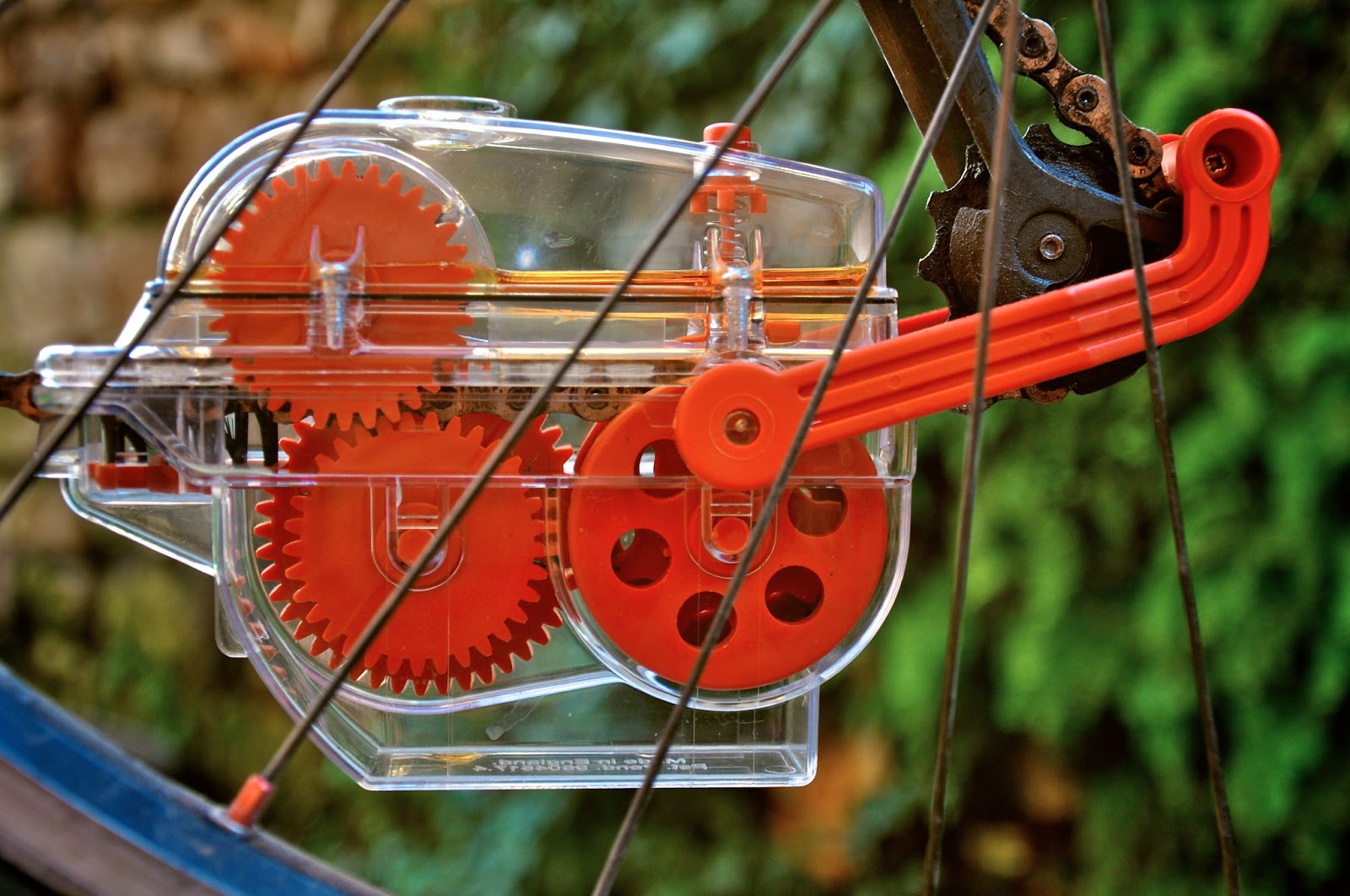 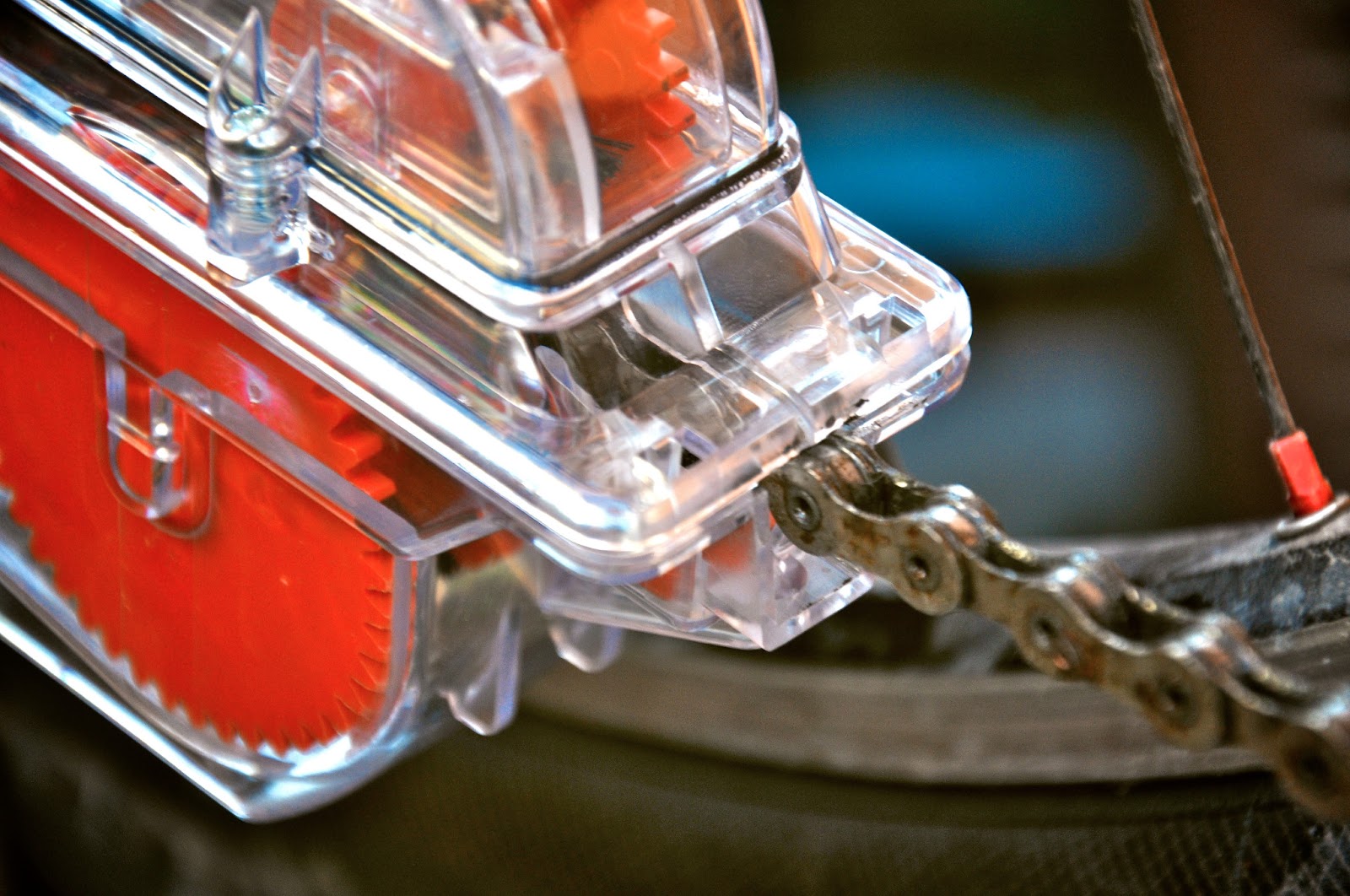 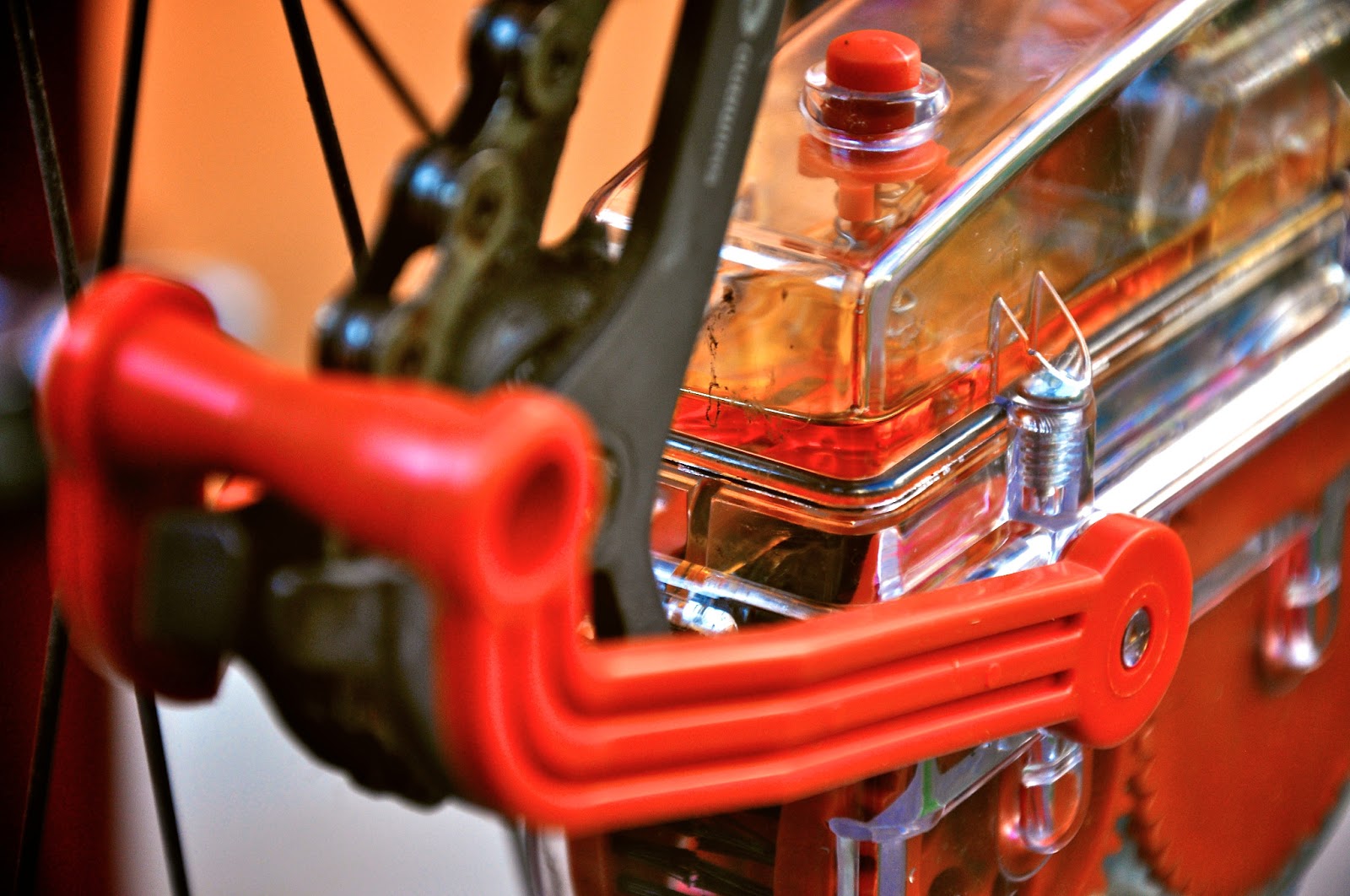 However, that little mishap aside this beauty way outperforms any other chain cleaner I've ever used. Okay, it's not the same as removing your chain and giving it an overnight bath in degreaser, but with this you don't have to remove your chain, and the results are outstanding.

Last, but not least, the G-Strings. Okay, your girlfriend is going to give you an off look when you say you're off the the shops to buy some G-Strings, but buy some you will after you've used them. Until now I've always used a nylon brush to wotk degreaser in between the cogs, and then an old rag to wipe away the really stubborn bits of dirt.

The G-Strings have a little secret up their sleeve though. They are made of a wound elasticated fibre, and you simply use the handy little hooks that are on each end to stretch the string out before cleaning between each cog on your cassette. The trick ck is that once placed between each sprocket the string effectively expands as you release a little tension, thereby filling the entire space, something an old rag just can't do. A simple see-saw motion then grabs the dirt, or you can use one of the hooks to latch it on to your derailleur guard and simply wind the pedals and use one hand to lift and place the G-String between each sprocket. 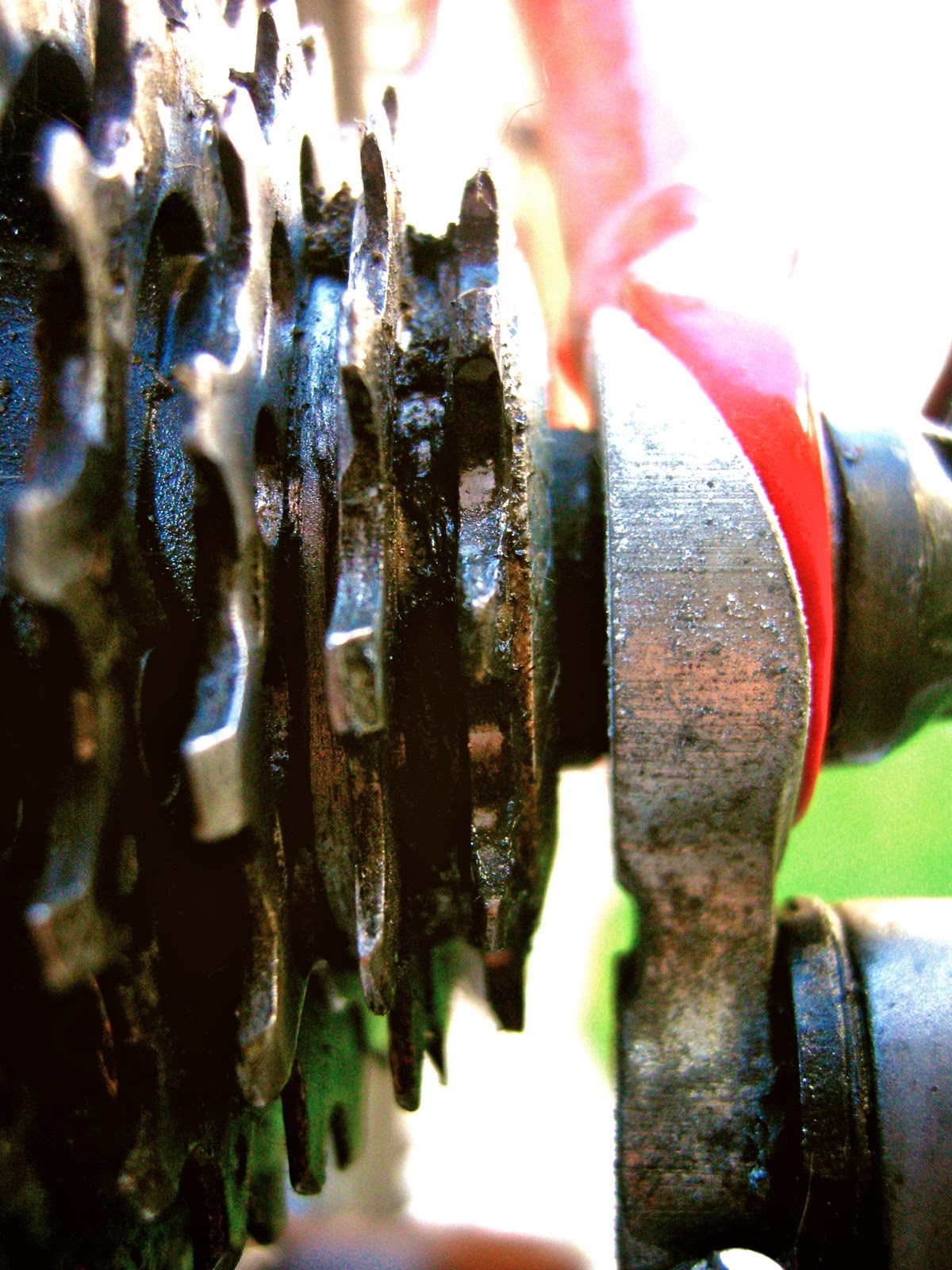 So, a quick  spray of the Dirtwash to help things along, and 10' of work, and my rear cassette now  looks like this. 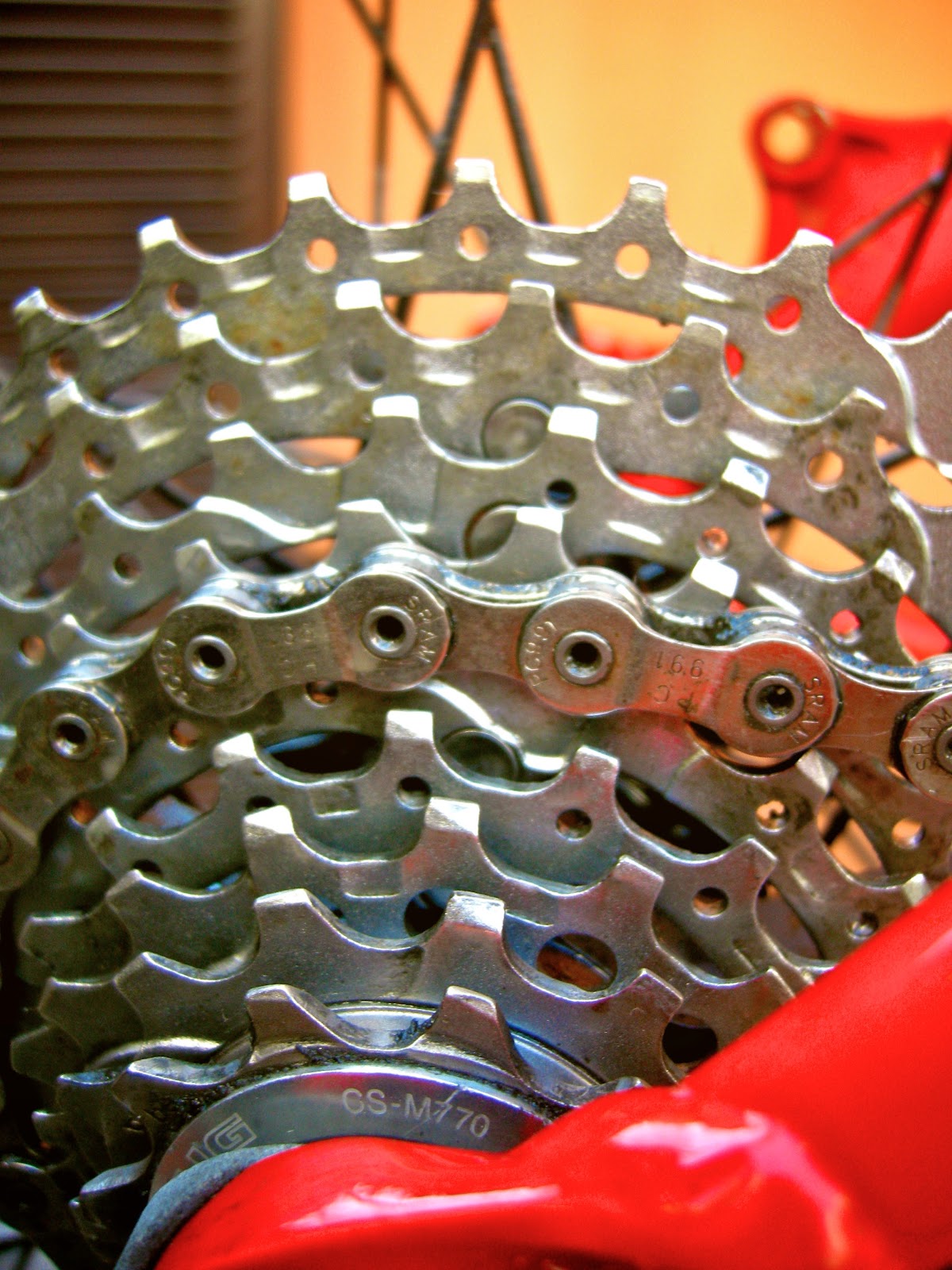 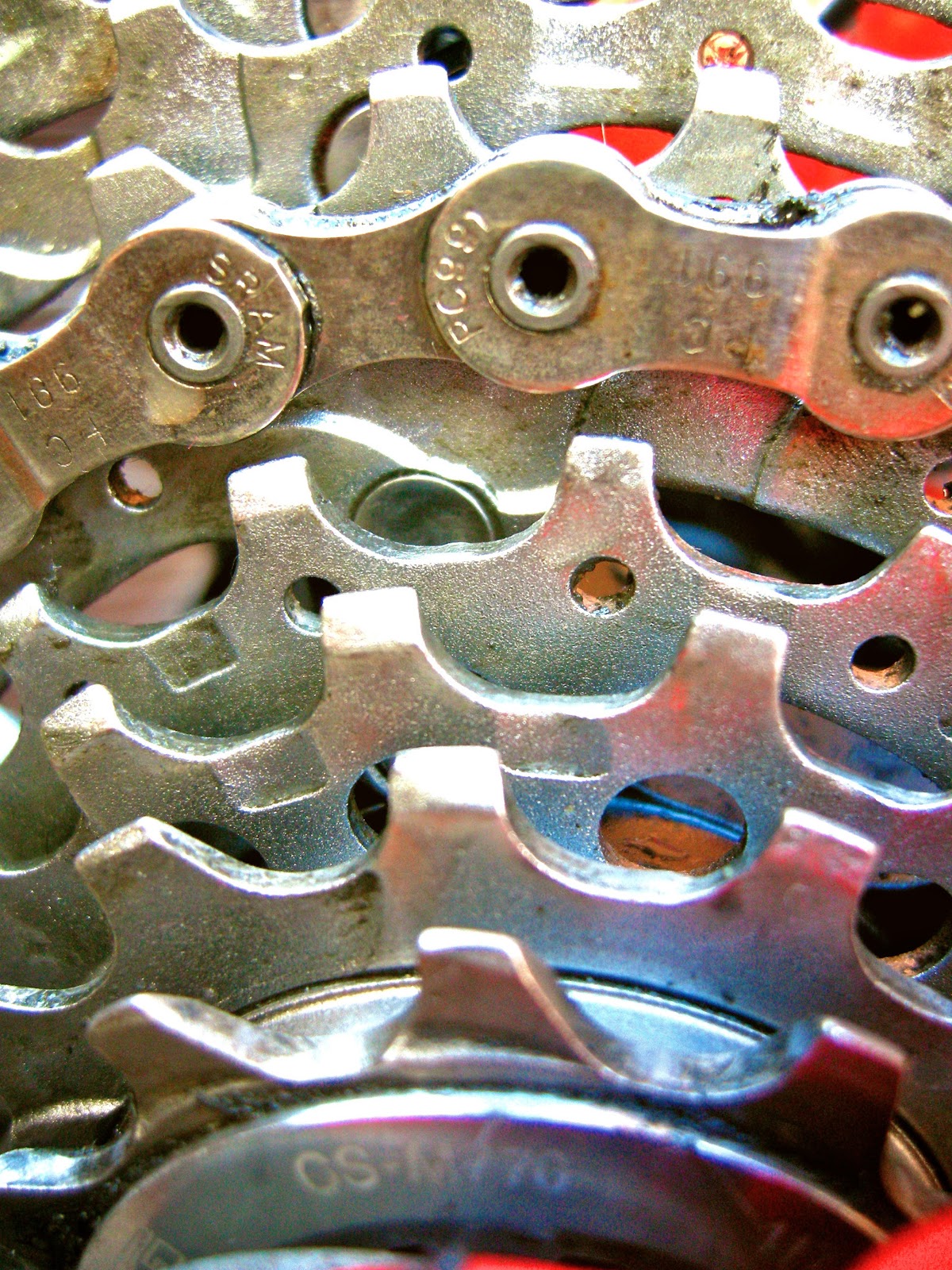 What's not to like? Simple but effective products, but they work well and for a short amount of time and not a lot of effort my old Stumpjumper looks a lot happier, as will I be when I ride next.

One last comment, the folks at Weldtite deserve some credit for their no nonsense approach to packaging. All three products came in minimal packaging, and none of those horrible hard plastic blister packs that are almost impossible to open.